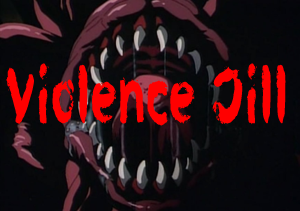 Patalliro was written by Mineo Maya in 1979 and already stands out by having a male author (there are few men who venture into shounen-ai without feminine sounding pennames) it’s an extremely long running manga, still ongoing today with a whopping 91 volumes to its name and features everything from comedic slapstick, blushing boy touch romance to full blown mpreg.
The anime was released in 1982 with 49 episodes and it’s one of those series I wish had more of a following because it’s so wonderful to look at, genuinely funny and weird, and totally cultural in a way not a lot of modern anime tend to emulate these days. There are glorious bishounen with long locks (the likes Eroica would swoon over), tawdry stories of the blue bloods that populate the boy King Patalliro’s world, humorous spy shit, serious romances and glorious shoujo sparkles and flowers in full bloom. It doesn’t delve too deeply into the enormous material presented by the manga but it does give you a pretty good glimpse into the main characters  personalities. 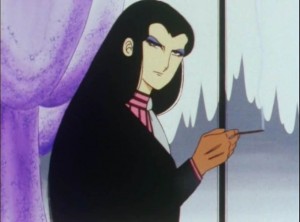 Patalliro: The Boy King
Bancoran is probably what I would consider the main character for most of the anime and his job is to protect Patalliro, a sudden child monarch. Unfortunately, Patalliro is more interested in being a kid and causing a raucous than actually ruling anything or taking the threats on his life seriously, much to Bancoran’s chagrin. But Bancoran has his own problems to deal with; namely a great many romances with swooning bishounen when they aren’t busily trying to kill him off to get at Patalliro. 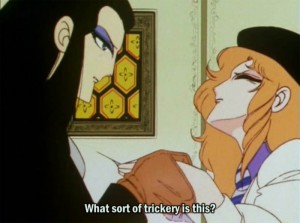 Bancoran has at least somewhat settled down with Maraich by the time the StarDust Keikaku movie came out and later they even (miraculously, with yaoi logic) have a baby in the manga. That doesn’t stop Bancoran from constantly cheating on Maraich who shrews it up with the best of them by throwing knives at his unworthy  ‘husband’ hearkening back to their early relationship as target and assassin. 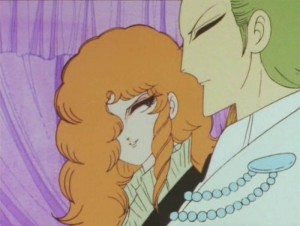 It’s worth mentioning that Toei did the animation and the backgrounds and detail are downright luscious even if sometimes the animation comes off as stilted or a bit jittery, it is after all, over twenty years old so the fact it looks this good is something to revel in. 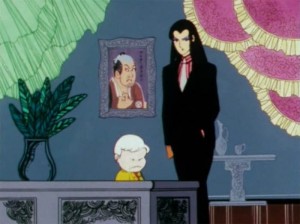 The line work and detail is an imitation of the manga which is also exceptionally beautiful and strangely replete with patterns and a strong design sensibility (I wouldn’t be surprised to hear Mr. Mineo Maya was in fashion design before becoming a manga-ka) the careful attention to strange architecture that seems a contusion of Japanese and European design sensibility is just plain cool to look at. 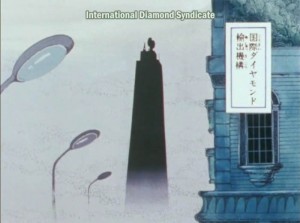 Shamefully this series isn’t available anywhere and there’s not that much fansubbed. If you can find it, the full Patalliro movie Stardust Keikaku is on the tubes along with some subbed episodes. I would love to see this cleaned up and pristine, especially since the manga is popular enough to keep going for 91 volumes in Japan but I’m not holding my breath. Any way you can see this show will be a treat, it’s quirky humour and beautiful eighties animation is really something to look out for. 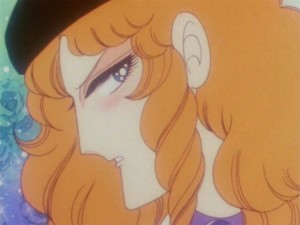 Check it out before the bishounen killer catches another victim~ Ohohoho~
Posted by ABCBTom at 6:37 PM 3 comments: